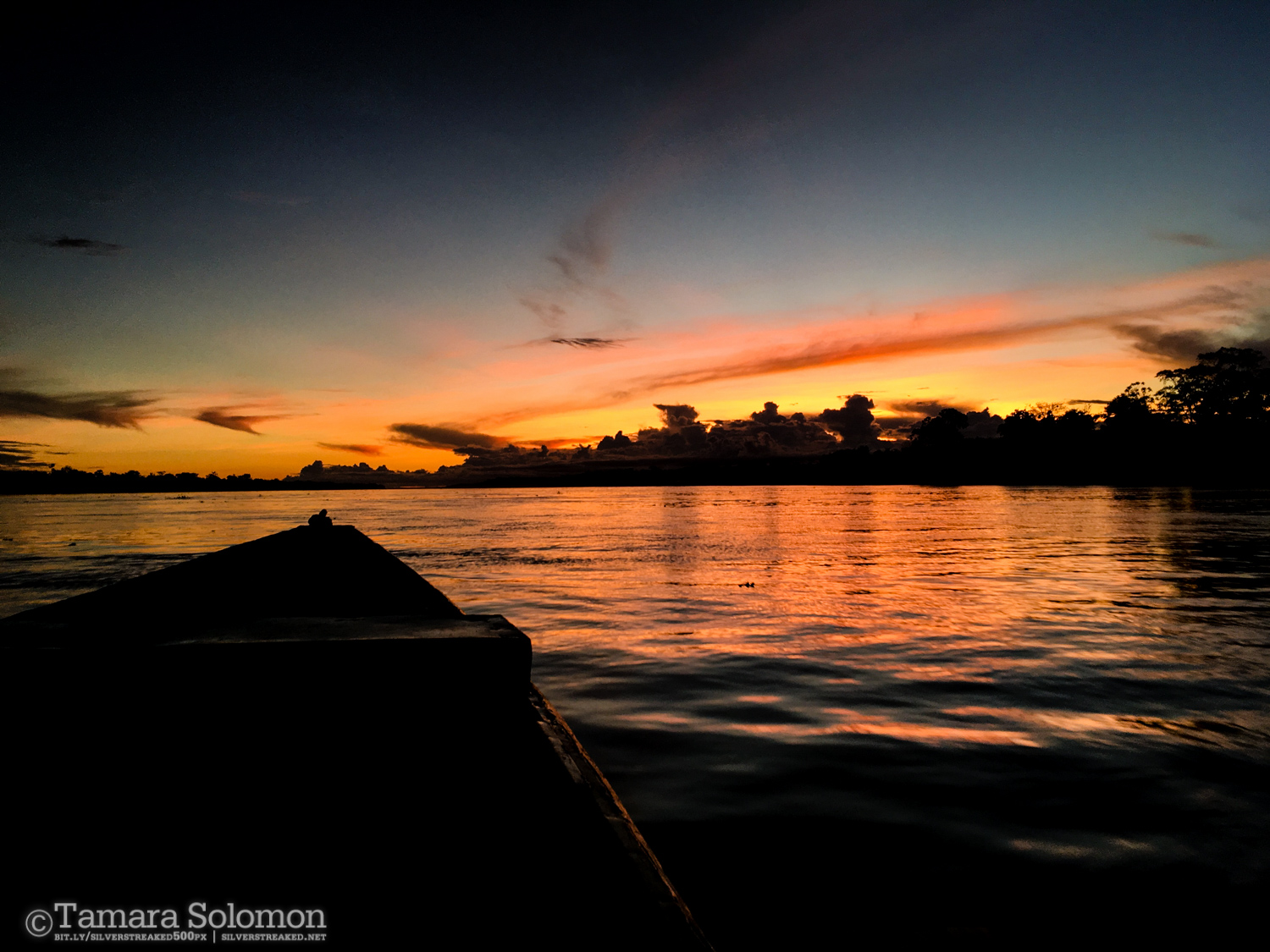 So, day two in the Peruvian Amazon – Sunday – was another full day. We had an early start (6am!) for bird-watching on the river, but unfortunately for me, I didn’t sleep well. It’s not the fault of the lodge or anything like that, the room and bed was super comfortable, but the first night in a new place is usually a bit disturbed for me. It was nice to fall asleep to the sounds of the rainforest though, and not the honking Lima traffic.

We saw some interesting birds, like two different kinds of herons – white herons and snowy egrets – and also a quick little monkey with orange paws which I partially got a picture of. It was a nice, peaceful boat ride, and oddly absent of mosquitoes. I guess they, like us, hadn’t had their coffee yet.

Unsurprisingly, I was partially asleep for the second half of the boat ride (I later found out that the guide had noticed, although hadn’t said anything at the time).

After a good breakfast and a couple of cups of coffee later, we geared up for another trek into the rainforest – long-sleeved everything and tall rubber boots. Wiser after the previous night, I also used  a scarf to prevent mosquitoes from getting down the neck of my pullover. And again, I doused myself in repellent, but again, it proved mostly ineffective. Although this time I could actually see them, which was nice. One of the guys in the group decided to hike with his camera in one hand and his bug spray in the other hand! He and his family still got bitten, but less so.

We hiked for about two hours, stopping every once in a while to see some insect, animal (frogs, mostly), and interesting plants with various purposes, including medicinal. I don’t recall the name of the tree, but there was a tree with red sap, which was good for soothing insect bites. We all got a little bit to try, and it seemed to work well, except it stained your skin orangey-red. There was natural ginger, lemongrass, various berries, and more. We also saw the partially underground home to a very large snake (I think it was a boa), but didn’t see the snake. Some people were very nervous about turning their backs on the hole… I can’t say I blame them!

We were basically on a big loop, so after two hours, we came back to the lodge, muddy and sweaty. After hosing the worst of the mud off our boots, there was some welcome relaxation (/shower) time before lunch, and all of us took full advantage of it! We hadn’t even walked that far (about 2.5km), but the heat and the full gear we were in meant that we got tired and sweaty very fast.

After lunch, we headed over to a nearby sugarcane distillery. Our guide walked us through the process of turning sugarcane stalks into liquid, then the liquid into alcohol. The alcohol is fermented and distilled much like regular spirits, except that they were doing it completely naturally at this distillery – no added gases, no temperature control. Just kegs and the heat.

There was a small lake at the distillery as well, where there were huge water lilies. I didn’t get a picture because the ground was sodden and my shoes weren’t waterproof (also the straw some people were standing on to get better pictures was crawling with ants…). That being said, seeing the huge lilypads was interesting – they had taken up almost the entire surface of the water.

We later sampled some of the finished products from the distillery – the clear “rum” made from the sugarcane alcohol, pure sugar honey, rum with the honey mixed in, rum with honey and ginger, and rum with honey and “seven roots”. Although the specific roots used in “seven roots” seems to vary from place to place, the blend is considered a natural virility enhancer for men. I found the rum not particularly drinkable by itself, but the mixes were decent, and the honey was delicious. There was an opportunity to buy some bottles here too, and some members of the group did.

After the short boat ride back, we had the rest of the afternoon free to do what we wanted. I tried out the hammock in my room (of course), and caught up on some reading with a Cusquena. I’d expected drink prices to be much higher, given the need to ship all supplies up the river by boat, but apparently not – the prices were the same as in the city. Hm.

Later, we set sail for a sunset boat ride. I don’t have too many words to describe how intense and beautiful the sunset was, so I’ll just give you a few pictures.

My photos don’t even really do it justice, but it’s close, I guess. Once we got to a suitable point in the middle of the river, the navigator cut the engine, and we just drifted, lost in the view. Once the stars started to become visible, that was equally impressive. I don’t think I’ve ever seen the stars so clearly, including the outline of the Milky Way in the background. Our guide pointed out several constellations, in Spanish. Once we were done taking photos (it was impossible to photograph the stars, even with a low-light lens – we were in a boat, so stability was lacking), he told us the story (in both Spanish and English) of a nearby tribe’s creation story and what they believe about death. It was a fantastic accompaniment to the starry night. Although I again got bitten by mosquitoes, this was probably my favourite excursion of the whole trip, which oddly enough has very little to do with the Amazon rainforest or the river itself. Oh well.

Dinner followed, and we all sat together as a group, just getting to know each other better. In my group, there was one girl from Vietnam, and three guys from Spain, so the conversation flowed in both English and Spanish. I’m happy we didn’t have any further excursions planned for that evening, the sunset and night experience was so peaceful that anything else would have been jarring. We all sat there, ate, drank, and just enjoyed the last night in the Amazon in good company.

More to come – after the weekend. I’m now gone again until Tuesday, on a circle trip between Cusco, Puno, and Arequipa. The trips are happening too fast for me to blog about them now! 🙂